A Brief History of Hermetic Storage 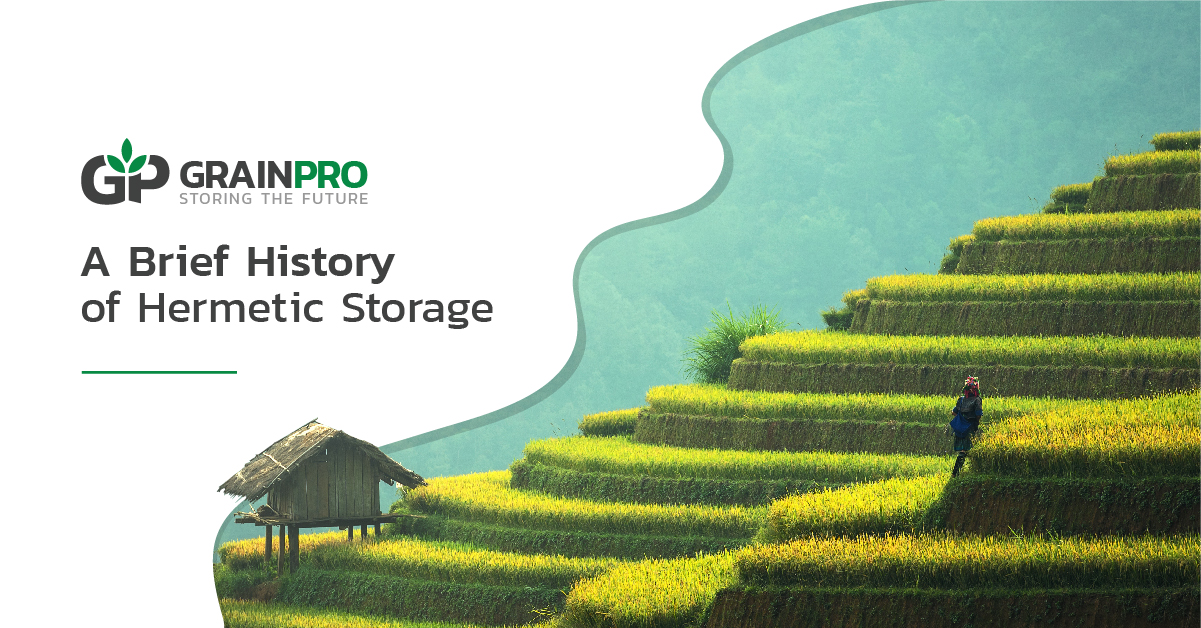 Food production has never been more efficient thanks to advances in agrotechnology. Agriculture has not only affected today’s world but early human societies as well. In fact, agriculture has played a significant historical role in shaping the way our civilizations have developed.

It’s a well-established fact that nomadic communities settled down to flourish into complex societies because of agriculture. Having stocked food allowed for more professions to evolve. From hunting and gathering, other occupations such as smithing, pottery, artistic pursuits, and many more were developed because of the opportunity that agriculture gave. This was possible largely because of effective storage systems that allow food to be kept for longer periods of time.

One of the most effective of these systems is hermetic storage, which relies on the concept of modified atmosphere. Simply put, hermetic storage has a gas-tight and moisture-tight environment that kills off insects and inhibits mold growth.

Related: All You Need to Know About Hermetic Storage

In the pre-neolithic and neolithic periods, hermetic storage was used in the form of underground pits. Found in the Middle East as well as in Europe, these pits were used to store dried food.

In Egypt, researchers also found underground pits which were 30 to 100 cm deep and were often lined with straw or bamboo basket weavings. Grain was then put into the pits and covered with a layer of sand.

Deeper and more varied underground pits were developed in later periods when iron tools were invented. Some pits that were discovered were bottle-shaped, while others were pitcher- or gourd-shaped. Evidence found in many locations such as Swaziland, India, and medieval Europe notes that the use of underground pits was a common and effective practice.

Newer pits such as those found in Australia in the 1930s were rectangular and were narrower as well as shallower. These pits were characterized more as trenches, where grain was stored and then covered in plastic sheets and a layer of dirt.

As agricultural practice changed to become more industrialized, producers and traders also shifted their grain storage from small scale to large scale. This meant the use of hermetic storage became less widespread; silos and grain bins became the norm, especially in temperate climates. In tropical and subtropical areas, warehousing is now common practice.

Though commonly used, these storage techniques also come with issues of their own. Silos and grain bins are known to be particularly hazardous when mishandled. Accidents such as collapsing silos can occur due to lack of structural integrity; highly combustible grain dust can even cause explosions in grain bins.

Related: Why Silo Storage is Problematic

Warehouses, on the other hand, are known to be susceptible to insect infestations and mold growth. Moisture and heat in ambient environments provide the ideal conditions for insects and fungi to grow. This makes commodities stored in simple burlap or jute bags vulnerable to losses.

Related: 5 Storage Pests to Keep Out of Your Warehouse

Despite the popularity of these newer storage methods, agricultural businesses are now looking to go back to hermetic storage. The air-tight and moisture-tight environment offered by hermetic solutions is a remarkably effective deterrent against mold growth and insect infestations.

Additionally, those in the organic sector are now also relying on hermetic storage. The gas-tight atmosphere inside hermetic storage eliminates insects without the need for synthetic pesticides.

GrainPro provides these advantages with innovative and cost-effective post-harvest technologies. In addition to storage, users can also make use of transport and drying solutions to create a holistic system. With a wide array of offerings, GrainPro can provide bulk, bagged, large-scale or small-scale storage for any dry agricultural commodity.

For more information on GrainPro’s Ultra-Hermetic Technology, click the button below.

Hermetic Technology: What It Is & How to Use It