From Tree to the World: The Origin and Sources of Chocolates 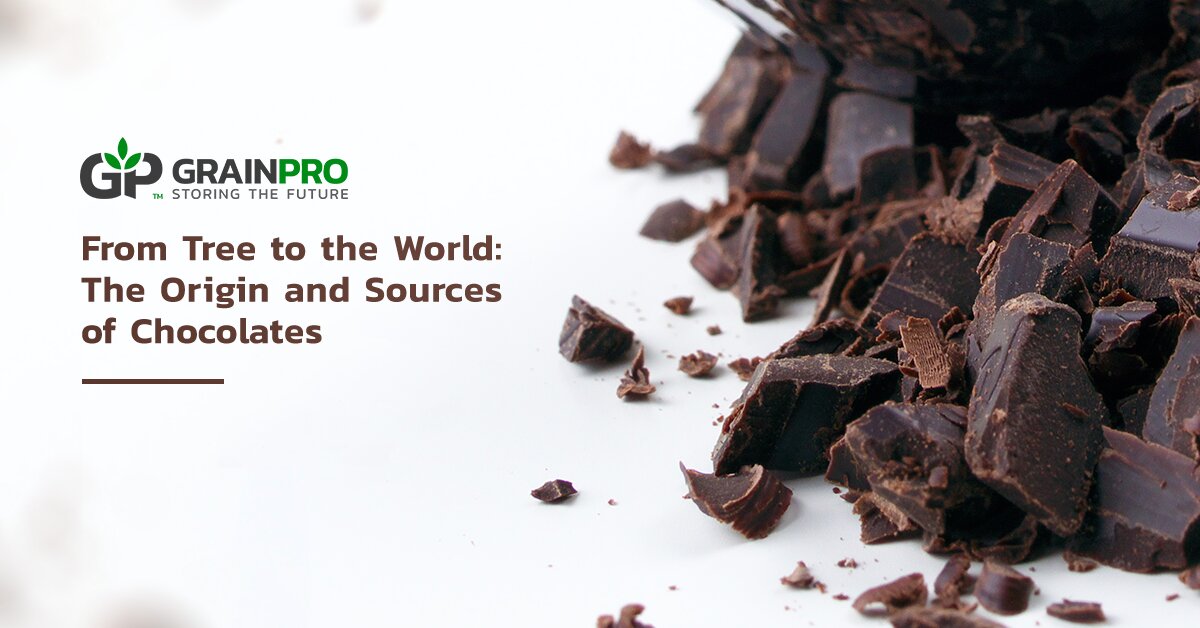 Chocolate is a big part of many cultures worldwide. Holidays, traditions, and celebrations involve chocolate in various ways—may it be a cup of hot cocoa during Holidays, a box of chocolate hearts on Valentine’s Day, a chocolate bunny for Easter, or skull-shaped chocolates for Halloween. Chocolate has been infused into other foods as well, especially in desserts as there is the classic chocolate cake, ice cream, pastries, and even in savory foods like in chocolate-coated bacon. Billions of people enjoy this sweet substance worldwide, but few know the source or origin of chocolate.

Learn more about it: Cocoa Processing: A Bean to Cup Story

This delicious treat originated in ancient South America. It is considered as one of the most precious crops of the first civilizations there. The Mayans, Aztecs, and Olmecs all treasured the cocoa tree, where the pods which housed cocoa beans grew. Cocoa beans were believed to be a gift from the gods, and were grown and carefully cultivated in sacred groves. They used the beans to create bitter drinks which were served during sacred rituals such as birth, death, and other religious ceremonies.

Cocoa was also given as post-battle rewards, and due to its highly valued nature, it was also used as currency for trading. When Europeans invaded ancient South America, they were introduced to the bitter drink made out of cocoa. But, they added flavor into the drink by putting cane sugar or honey as sweeteners. This more pleasant and sweeter version of the cocoa drink was brought back to Europe where it became a very popular and well-loved beverage.

Europeans enjoyed the said version of the drink for more than one hundred years until Joseph Fry invented the first modern chocolate in 1847. He made the sweet discovery when he added melted cocoa butter to powdered cocoa, creating a moldable paste. The paste was then molded into a bar shape, introducing the chocolate bar that we know today. This was further developed by John Cadbury, who introduced his brand of the chocolate bar to the market by 1868.

Along with the developments during the Industrial Revolution, a way to mass produce chocolate at a lower cost was also introduced. This popularized the treat even further and eventually, it was spread and enjoyed worldwide.

Today’s Sources and Destinations of Chocolate

Currently, the majority of cocoa is sourced from Africa, with 30% coming from Ivory Coast alone. Other countries that produce this valuable commodity are Ghana, Nigeria, Cameroon, Brazil, Ecuador, Peru, Mexico, Dominican Republic, and Indonesia.

An estimate of more than 4.5 million tonnes of cocoa beans are consumed annually. According to data, Switzerland is the country that has the highest per capita consumption of chocolates, followed by Germany, Ireland, United Kingdom, and Sweden. Switzerland is also well-known for their home-manufactured chocolates, and these sweet delicacies are exported across the globe.

Transporting the beans for processing and consumption into these countries, however, can be difficult. In order to retain the high quality that consumers demand, certain sensitivities of the cocoa bean must be taken into consideration.

This is a huge risk that cocoa handlers always want to avoid. The mold growth adds to the labor costs because sorting the affected beans from the good ones takes time and money. More importantly, however, handlers want to avoid excessive moisture because of the damage on the quality of the beans. Excessive moisture increases the amount of  free fatty acid (FFA) content within the cocoa beans. Handlers want to maintain the lowest possible level of FFA in the beans because an increase negatively affects the taste. As the FFA increases, the pleasant bitterness of chocolate turns into rancid bitterness, which puts  the effort of growing, harvesting, fermenting, and drying these precious cocoa beans all to waste.

Learn more about it: The Best Way to Transport Cocoa Beans

Fortunately, there is a solution to this dilemma. One such solution is the use of hermetic technology. The TranSafeliner (TSL) is an air-tight and moisture-tight bag designed to accommodate commodities shipped in a container liner throughout long journeys at sea. It is particularly helpful during the cocoa beans’ voyage from Latin America, Africa, or Asia going to Europe and other parts of the world.

The protective barrier properties of the TSL keeps moisture away from the cocoa beans while retaining the flavor and taste that people crave. This solution ensures that people will continue to enjoy delicious chocolates, no matter what the occasion may be.

To learn more about GrainPro’s hermetic solutions, click the button below.

Learning how to properly dry green coffee beans is an important task to get the perfect cup. Here are a few ways on how to dry your green coffee.

A Beginner’s Guide to Roasting Coffee

Knowing what happens to coffee beans before they reach our cups, the physical and chemical changes that take place during the roasting process, can help us understand how important it is to store them properly in order to maintain their freshness and distinct flavor.