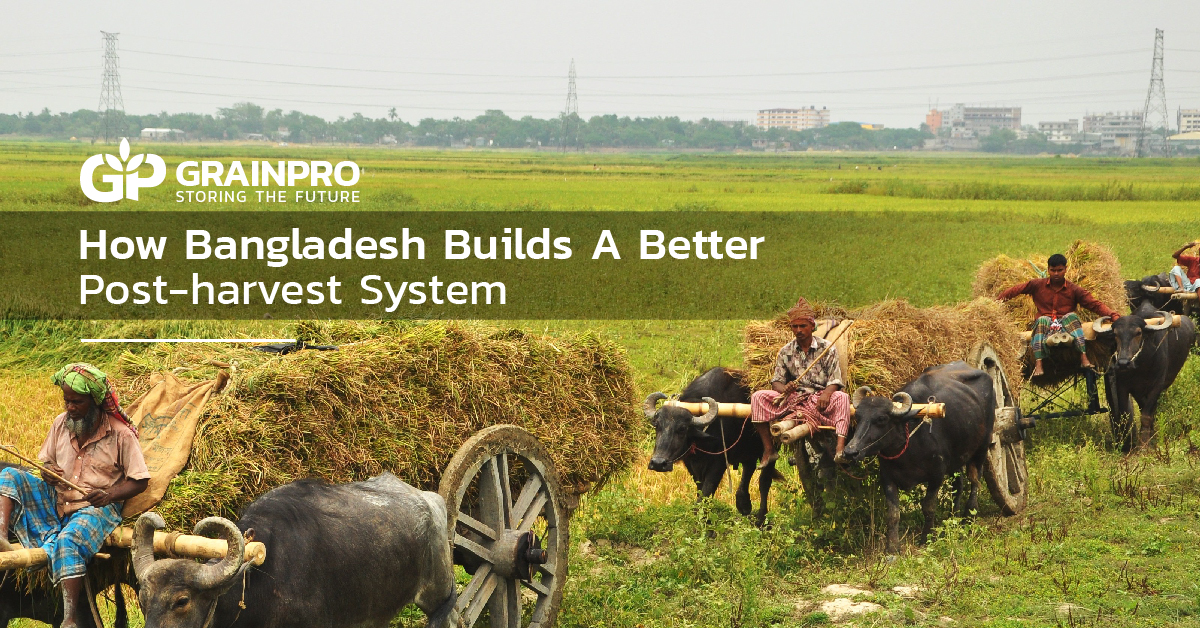 Achieving food security is the key development priority of every nation. With steady economic growth over the past two decades, Bangladesh has made significant strides towards achieving food security. From 2000 to 2019, it has reduced poverty by half, according to the World Bank. In the same span of years, Bangladesh also more than doubled its GDP per capita from USD 1,937 to USD 4,753, as reported by the FAO.

Despite the remarkable growth brought about by increased productivity and crop diversification, Bangladesh's overall economy remains to be subsistence-based and is likely to face further challenges due to climate change. About 1 out of 4 Bangladeshi still live in poverty; almost half live in the extreme poverty line. With about 48% of the population dependent on agriculture as a source of livelihood, it remains the country's economic foundation. As its strategic approach to improving food production, the government has implemented programs and policies primarily focused on helping smallholder farmers. Considering their critical roles as food producers for an increasing population, much attention is devoted to uplift their welfare.

The Production, Storage and Distribution of Quality Seeds of Rice, Wheat & Jute at Farmers Level through Modern Technology Project by the Department of Agriculture Extension (DAE) in Khamarbari, Dhaka aims to improve farmer productivity by addressing food security at the farmer level. Among the estimated 18 million farm households employed in the agriculture sector, 45% are considered poor, and about 53% are virtually landless. The average land size of a farmer is approximately 0.5 acres. Under the project, an initial 800 units of the hermetic GrainPro Cocoon of one-tonne capacity was awarded for securing a portion of the farmer's rice harvest to be used as a food reserve and seeds for the next cropping season. Farmers who experienced storing their paddy seeds in these hermetic containers benefited from a twenty percent increase in production because of better seed quality, thereby increasing farmer income. The project commenced in partnership with the official GrainPro partner in Bangaladesh, Allied Agro Industries and ACI Motors. 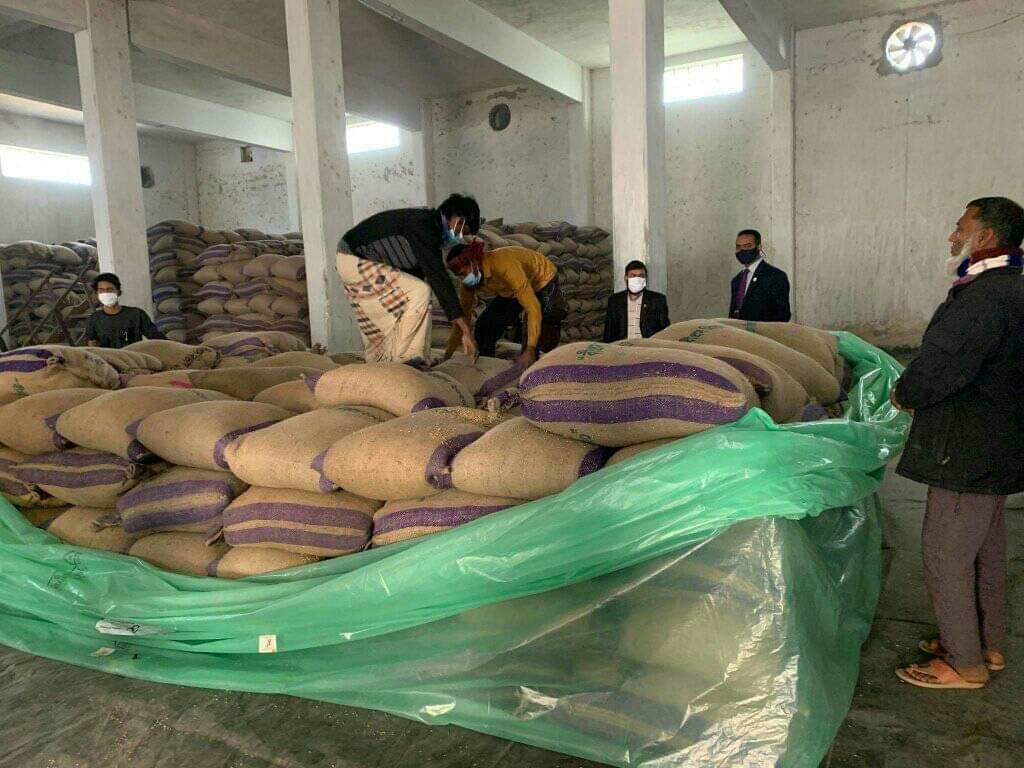 Sacks of rice are placed inside GrainPro Cocoons for better protection against insects and mold.

The GrainPro Cocoon addresses storage losses by preserving paddy in an air-tight and moisture-tight container. Without the adverse effects of oxygen on the quality of stored paddy, seeds stored inside the Cocoon have a relatively higher germination rate and vigor than seeds stored in regular jute bags. The Cocoons inhibit infestation and mold growth by confining the paddy seeds in an atmosphere with low oxygen levels where the natural respiration of seeds and insects trapped inside the container depletes oxygen, even without chemical fumigation. 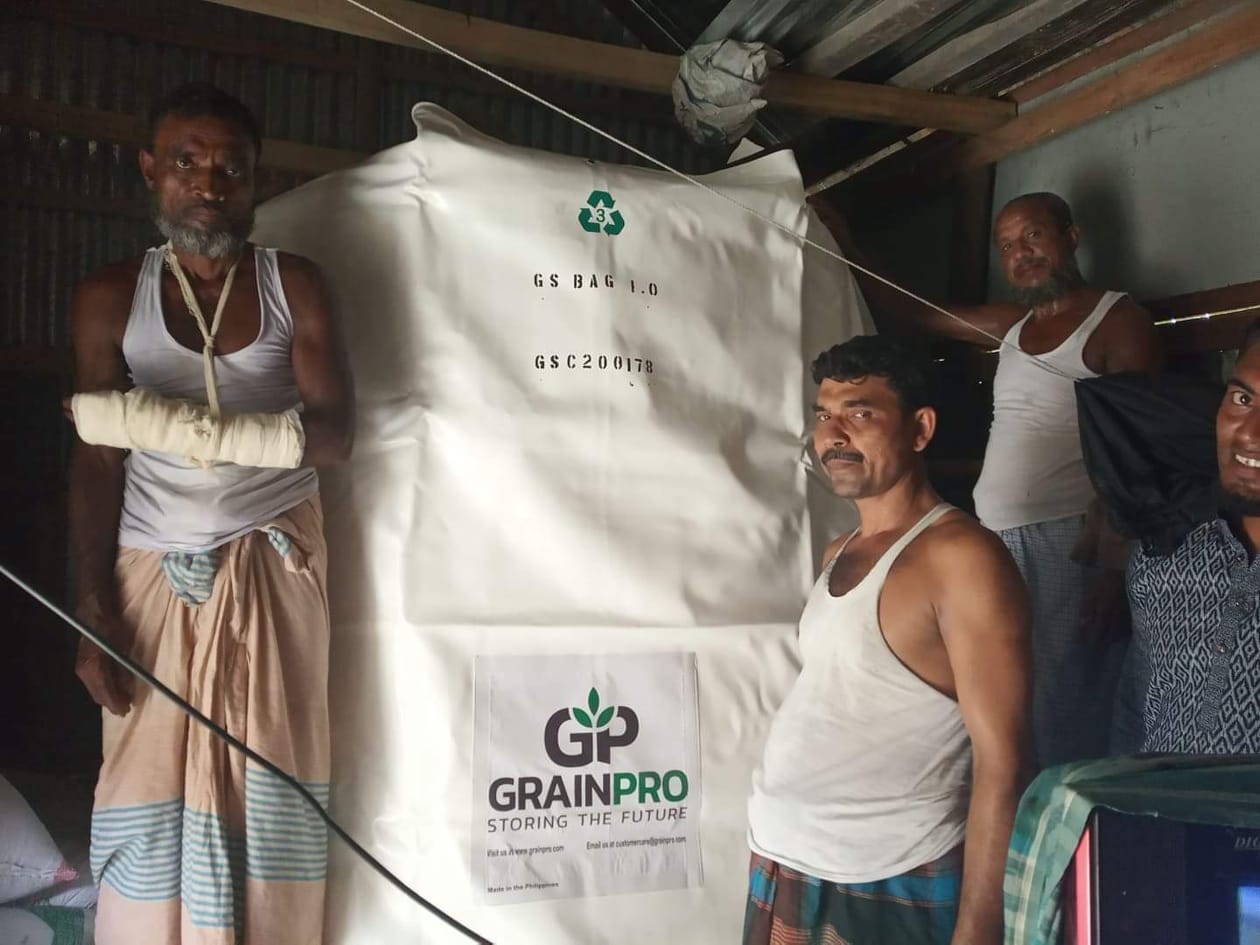 Bangladeshi farmers with the GrainPro Grainsafe, which can be used outdoors.

Additionally, the Cocoons are collapsible and can be easily used indoor or outdoor as storage. Even in the absence of a sturdy warehouse, the farmers' harvest is well protected in any type of weather. With the presence of 800 rivers within the country, Bangladesh is normally frequented by floods. GrainPro Cocoons provide flood protection to grains for up to 1 meter high.

Hermetic GrainPro Cocoons are designed to minimize post-harvest losses by keeping the grains at an equilibrium moisture content of 14% for paddy. When stored in regular warehouses, post-harvest losses are estimated to be at a minimum of 13% from harvest to storage, according to FAO. In 2019, the country produced about 54.5 million tonnes of rice. Without sufficient protection, nearly 7 million tonnes of paddy rice goes down the drain due to post-harvest losses. With a scarcer land resource and more pressure to produce more food for a growing population, the government is fast to act by providing storage facilities that can safely preserve their harvests. Under the same program, the provision of about 4,000 units is intended to be included in the Department's budget next year. While there are several constraints towards achieving food security, each effort to reduce losses and improve productivity takes the nation a step closer towards achieving its goal.

Hermetic storage has been a phenomenon in the safe storage of dry grains, spices, and seeds. Private companies around the world have been using GrainPro hermetic storage for almost two decades now to prolong the shelf life of their coffee, cocoa, feed ingredients and even planting seeds lasting for years. The World Food Programme, International Rice Research Institute, FAO, and Ministry of Agriculture of several countries have also been using these products for their Food Security Programs and for their farmers.

GrainPro designs and creates innovative solutions for the drying, storage, and transport of your products. For more information about GrainPro solutions in Bangladesh, contact the following:

You can also read more about better post-harvest solutions by clicking the link below.